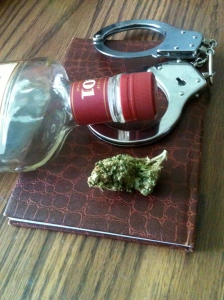 Jack had never had slept so comfortably in his entire life.  Usually he was in so much pain when he woke up in the morning that he needed either a shot of whiskey or a cigarette to make the pain go away.  For the first time in a while he woke up in high spirits.  It wasn’t either to the prison alarms or his mother’s angry fighting with his dad, or his mother’s crying, or his mother calling telling him his “lazy good for nothing ass needs to wake up so that he can get some kind a job and pull some fucking weight for once.”

This time, he awoke at 10, a more than comfortable hour for once, to the clitter and clatter of pots and pans and the delicious smell of frying bacon and scrambled eggs with pepper-jack cheese.

FRESH bacon, an inconceivable luxury in the joint. Jack knew it was real cheese in the eggs he smelled to, the fake cheese they used in the pen reeked of grease and chemicals.

Jack got up yawning and walked to the kitchen, Kobe, Alex and Fiona were all at work at the same time making the delicious treats.  Jack offered his help but they assured him they had everything covered.

“Bro don’t trip, we got it,” said Kobe with his usual smile.  “Go wait in the living room and pack a bowl, work up a good case of the munchies for a bomb-ass breakfast.”

Jack obeyed.  He wished there was some way he could help, but he settled for bong hits by himself in the living room.  Once the breakfast was served they all sat around the kitchen table with breakfast and a joint.  Kobe, Alex, and FIona carried on the conversations they would have if Jack was not normally there, and Jack just sat and smiled when everyone smiled and laughed when everyone laughed.  He pretended to know what they were talking about when they talked about SHpongle and Bass-Nectar.  Jack hadn’t followed music since he got locked up and the Crunk Hyphy “movement” was going on.  These were the conversations that reminded Jack he was an outsider, just a visitor.  He loved these three, but he could tell that he wasn’t intimate enough to be a part of the family.  He was more than welcome, he didn’t doubt that.  He just wasn’t an official member, more like an honorary one.

But he enjoyed himself for now.  The three had decided to spend another day at the beach, and Jack they said was more than welcome to tag along.  He accepted, and they set out.

While in the car Jack decided to ask, “You know, I am a little short on cash at the moment, you guys wouldn’t happen to know where I could get a little work around here, at least for a few weeks?”

Kobe actually smiled, “Yeah, Actually, we have a job opportunity for you.”

Jack guessed, “Does it involve the giant crop in your guy’s cottage?”

“Basically we need someone to sell our weed for us.  We are in school when we aren’t in the house taking care of the plants.  We already are sitting on a shit ton of crop that we haven’t moved,” Kobe said.  “The most we can manage to push is just an occasional quarter or ounce that that our friends buy.  You know, don’t get me wrong,” he conceded, “it’s nice of them to buy from us, but it only goes so far, you know?”

“I get it,” said Jack.  “You guys want me to peddle your weed for you while you’re in classes.”

“Exactly,” said Kobe.  “We’ve been looking for someone for a while, and since you’re crashing on the floor for now, consider it your rent, and we will give you 25 percent if that’s cool with you?”

Jack was more than cool with it. “Sound’s perfect.”

Jack enjoyed another day at the beach with his new friends, they then retired to the cottage to more weed and beer and a Bill Murray movie marathon.  The next day was Monday and the three had classes all day long.  So Jack got as much of one of the strains that was already dried, the first was Purple Kush, into sandwich baggies, weighing out grams, eighths, and quarters.  He then loitered outside local high schools, malls, and beaches, and anyplace else he could find teenagers.  He sold out before noon and had to make his way back to the cottage on foot to get more.

He made four hundred in cash.  He got lucky and he knew it, but still Jack felt smug.  He couldn’t help but feel he had earned his keep.

Needless to say the three were thrilled that so much weed had been sold.

The next day was slower, much of his previous customers still had the weed from yesterday, but they all brought friends to Jack.  The weed was so good that word of mouth spread faster than Jack could expect.

The third day was better than the first, the original customers were out by now, and so were the friends, and this time the other friends brought their friends.

In less than one week Jack had pushed a pound of weed.

They decided to celebrate their new found success by showing Jack the party scene.  Everyone from school was going to this beach bonfire and so were they.  They had more Jack Daniels than anyone else at the party.

Fiona and Kobe were off dancing together, Alex was with his girlfriend, and Jack was standing alone with some weed and taking swigs of a fifth of Jack Daniels.  Jack usually didn’t care about whether he was alone or not.  When random drunk college girls were rubbing up on him or talking to him, Jack just stood and didn’t react in the manner that the girls had wanted.  Jack was confused as to why he was so uninterested.  He had been in jail for such a long time that at night he felt like he could jump on any girl at any minute.  But now he was just uninterested, he couldn’t help but feel a little pathetic considering how many opportunities he had. College girls are already loose and being a thief and ex con gave him the danger angle, but he decided to just spend his time getting intoxicated and watching the crowd.

As he stood and people-watched, Jack could not help but reminisce about the parties he used to go to back in South Central.  They weren’t many differences, but the few that there were, were noticeable and not what Jack was accustomed to.  He was used to shit getting broken, fights breaking out, and know one used to share stuff, it used to be all BYOB and bring your own weed.  But in a college party the air seemed to be about sharing.  It was the goal of everyone not just to get fucked up, but to get everyone fucked up with them.

It wasn’t until the sirens and lights went off that the party came to its close.  Everyone made their way out, and got into their cars and drove off.

Kobe had a few drinks, but he was definitely sober enough to drive.  Alex was so drunk he forgot he was wearing pants, Fiona was in a girl drunk, she was giggly and slumped onto any shoulder she could, and since Jack was in the back seat he was the lucky winner of being her support beam.

They stumbled their way into their house, got into a circle and smoked a final joint for the night.  They all passed out almost in unison exactly where they slumped in the living room.

That night Jack dreamed of Alice, only in the dream she didn’t have her tattoo.

He then had another dream that he was still in prison, watching a guy get jumped in the courtyard during break.  Jack had lost count how many times he had seen that happen in real life.  But there was a big difference this time.  In his dream he could remember saying, “I wonder if he is okay.”