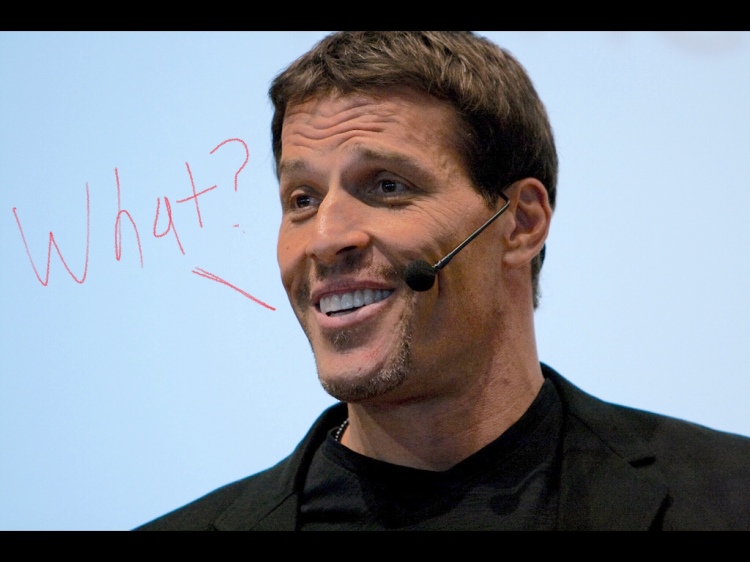 This morning videos from Now This went viral on twitter showing Tony Robbins belittling the Me Too Movement. In the video he rants against living under a sense of “victimhood” and says women are using the movement to foster “anger” and make themselves “significant by destroying others.”

In the video we also see a woman named Nannie McCool confront him about his belittlement of the movement, during which he actively intimidates her in-front of a large crowd in San Jose by pushing her back and walking against her. McCool, a survivor of sexual abuse, stood her ground.

“You are doing a disservice to the Me Too movement.” McCool maintained, with McCool confidence I might add and to applause from women in the crowd.

Robbins, in his ever so bizarre straw-man fashion, told the crowd of a story about a client who would not hire a woman because of looks as if it would help his case.

Much has already been written about how full of shit Tony Robbins is. George Carlin has one of the best comedy routines in the world about how there is no such thing as “Self help.”

“If you buy a book that tells you how to do something, that’s not self help, THAT’S HELP. Plus if you do something yourself, then you didn’t need any help.” – RIP George.

But what bothers me the most about Tony Robbins and his capitalization on the anachronistic “by your bootstraps” American dialect, well actually that’s it completely. Tony Robbins and his industry of self help books and seminars are part of what I call the “industry of alienation,” the capitalization of alienation directly. We are already alienated from the products of our labor and we are consistently sold this lie that work and resources are a scarcity so we must be in competition with each other, and therefore must help the “self” before we help a comrade and fellow worker. What Tony Robbins does is perpetuate this myth of competition and cashes in on it directly by selling his books and putting the delusion in his followers minds that they will one day be millionaires.

This outing of Robbins as a sexist shows how inherent patriarchy is to the capitalist structure. The Me Too Movement is liberating women from silence about abuse in the work place and their immediate environment, and in the process powerful white men are facing public scrutiny in ways they never had before. Tony Robbins can now be added to this list thanks to McCool and the retweeting thumbs of twitter users. Yet what is most important to remember is that this liberation from abuse and belittlement will help women and therefore the whole working class unite. Never forget that most of the population is women and therefore the labor force in this world both domestic and industrial is that of women. I am unaware of McCool’s politics and doubt she identifies as a radical, leftism is still marginal especially for people who would attend a Tony Robbins seminar in the first place. However this action did oust this man as the patriarchal douche and therefore class enemy that he is.

Much has already been written about the intersectionality of capitalism and patriarchy and much more eloquently so, but the recent Tony Robbins fiasco is a perfect example of how people like Robbins perpetuate the divide amongst workers and prevent us from uniting against our capitalist oligarchs.

Much has also already been written about how Tony Robbins is a quack and a fraud. I remember two years ago people were rushed from his seminar to treat severe burns on their feet from walking on hot coals. Yet I decided to do a little research myself on Tony Robbins.

First of all, the man did not go to college. Now this is not a defense of academia inherently nor is it criticism of those who chose not to attend college for whatever reason. Yet my point is that with no qualifications besides his anecdotal experience, painful though parts of it clearly are, anecdotes are not training. His stories about a sad home life or his celebrity clients or constant name drops, these things are not degrees in sociology, economics, nor psychology. He has no basic training in anything.

The companies he has founded or has stake in also generate a combined income of $6 billion a year. Forbes put Robbins net worth at $480 million in 2015.

Robbins is not a friend of the worker, and as such he perpetuates sexism and the structures of capitalism which therefore chain us all. Self help is capitalist propaganda meant to perpetuate alienation. We must practice SELF CARE, not self help. We must rest, watch our health, drink water, and meditate or at least self reflect in order to restore ourselves and function at our best. What we must not do is delude ourselves with the constantly disprovable capitalist lie that good old American gumption is enough to over come creepy gropers at work and a racist imperialist super structure that robs us all of the wealth we generate. Self help is a lie, Tony Robbins is sexist danger to working class solidarity, and I just spent over 1,000 words stating the fucking obvious.