Yesterday a confrontation at a vigil between Chelsea Clinton and a Muslim woman who was in mourning over the Chirstchurch massacre went viral. The video shows that the woman stood up to Clinton for being present at the vigil after Clinton’s comments about Ilan Omar opened up a massive wave of islamophobic attacks against Omar. Clinton never apologized to Omar. 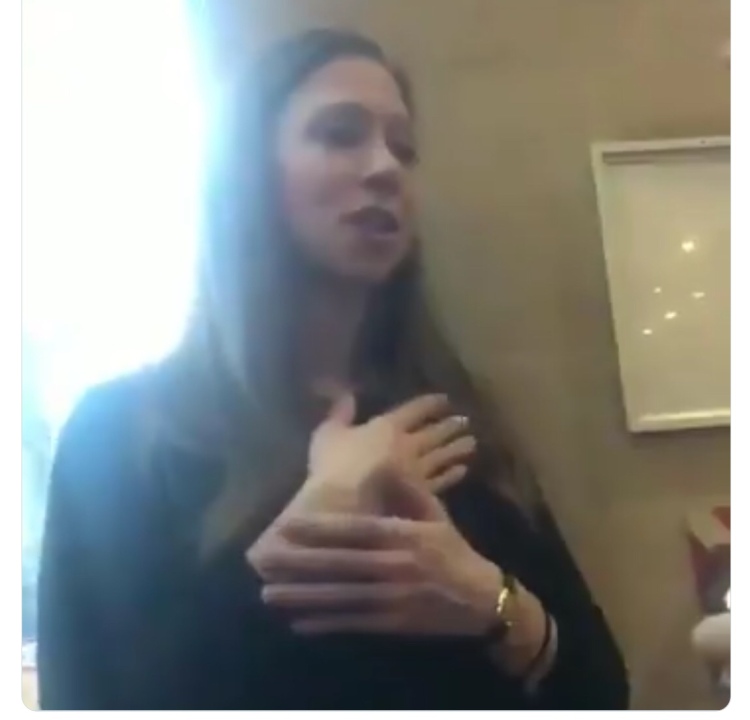 Clinton can be seen in the video listening to the women, but it is clear she is not actually registering the woman’s objections to her presence, or she is actively ignoring them. Clinton simply nods and gives a “non apology” that would make her parents proud.

Clinton replies to the woman’s complaints with, “I’m sorry you feel that way,” repeatedly. At one point in the video a comrade of the Muslim woman angrily asks Clinton, “What does that even mean?” To which Clinton gave no answer.

My dear reader, as a white male with a middle class background, please trust me when I say that I know what “I’m sorry you feel that way” means.

“I’m sorry you feel that way,” is, to be frank, a backhanded white people way of avoiding an actual apology. The objective of using those specific words is intentional, the purpose is to make someone think you apologized to them without actually apologizing for anything. It is annoying and backhanded, I have seen people in my white family do it all the time and it is one of the whitest things a person of privilege such as Clinton could do.

When someone says “I’m sorry you feel that way,” instead of just, “I’m genuinely sorry,” they are not apologizing for their actions but making it seem that you are the one who should be apologetic for yours. I can vouch on good authority that “I’m sorry you feel that way,” is Clinton’s passive aggressive way of saying “I did nothing wrong, you should stop bothering me.” There is a word for this, gaslighting.

Of course Clinton’s followers leap to her defense while ignoring the reality that defending a white woman who upset a Muslim in mourning just after a mosque shooting is in of itself an act of white supremacy and Islamophobia.

I got into several twitter debates already about this. Many said that the woman’s attack on Clinton, “wasn’t graceful.” This is the same kind of argument you hear from city council members or local politicians who get shouted down or cussed out by Black Lives Matter supporters when there is a police involved murder of a black life. Mayors and city councils are faster to get upset at a black person for saying “Bitch stop killing us!” because swearing in city council chambers “violates decorum.” Instead of focusing on the message, which is the “stop killing us” part of that sentence, these selective solidarity liberals focus only on the method.

Instead of focusing on the message of this woman, which was “your comments about Ilan Omar perpetuate this kind of slaughter and you have yet to apologize for it,” she is blatantly ignored because the woman spoke to Clinton with intensity and anger. Anger that was completely justified, especially since Clinton and the liberals who left Omar vulnerable to islamophobic attacks have yet to apologize.

To be in a position where you are more concerned with an oppressed person’s delivery of their message rather than with their actual message is the epitome of white privilege and Clinton and her supporters fail to see that. 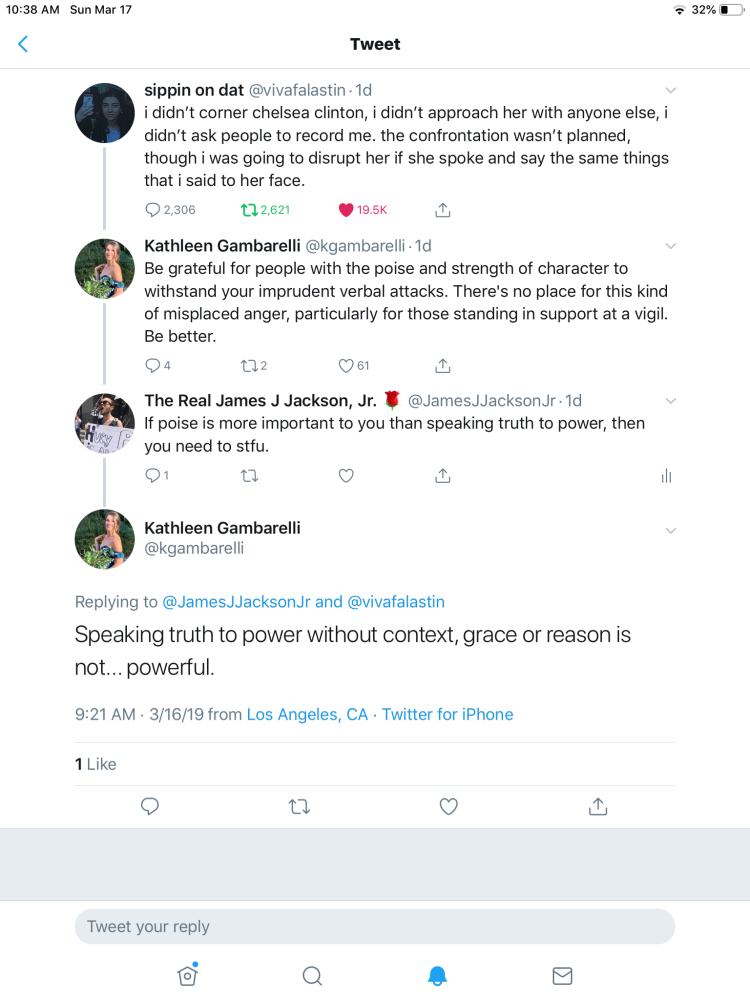 Aside from saying that the woman was “not graceful” other’s have said that her rebuking of Clinton was a staged act because the woman was wearing a Bernie Sander’s “College for all, Medicare for all” t-shirt. Some tweets even read “Who wears a political shirt to a vigil? It was clearly staged.” Once again we see an act of white supremacy here. To tell a Muslim woman, or anyone for that matter, what they should wear in their time of mourning is not only bad optics, it is belittling and dehumanizing. This is not about her wearing a Bernie shirt, it is about the fact that she felt used and ignored and vulnerable, a vulnerability which Clinton enabled with her rhetoric. Does any of that matter to liberals? No, because they don’t like what she was wearing when she did it.

Other defenders of Clinton have argued that “she was an invited guest,” and she didn’t “deserve” to be called out because she “came to the vigil in good faith.” First of all, the Clintons, or any capitalist for that matter, has never done anything in “good faith.” There is always an ulterior motive to anything the capitalist class does. Clinton was not there to mourn with muslims, she was there to be seen mourning with muslims.

It should also be noted that there is nothing to be suprised about here. The Clinton’s have a long record for both enabling white supremacy and using the optics of black or brown people’s issues to make themselves look good. Clinton being present at the vigil is similar to her father going on Arseno Hall or her mother moving to Harlem, it is a chance to be seen amongst an oppressed group without actually doing anything to help them. Let us also not forget that Hillary bragged about having slaves at the Arkansas governor’s mansion (prison labor was in fact used during their entire stay) or her infamous “superpredators” comment. Nor should we forget the crime bill signed into law by her husband which has perpetuated the modern day Jim Crow of prison labor to increase exponentially. Clinton being at that vigil was an attempt to use non white people for optics, period.

There is no excuse to defend Clinton on this one, yet of course liberals will do it because liberals will do anything to protect their identities as the progressive and understanding ones, even though their desire to carve out a progressive identity is coming at the cost of black and brown lives and is inevitably perpetuating the very forms of hatred they claim to be against.

To suggest that this act was staged because the woman was wearing a Bernie shirt is belittling and reductionist to her sense of mourning. To give the woman instructions on how she “should have” approached Clinton is an act of white supremacy. To defend a white woman who perpetuated Islamophobia with her rhetoric instead of listening to a Muslim woman’s righteous outrage is in of itself further perpetuating Islamophobia and therefore is an act of perpetuating white supremacy. This shows that liberals only express solidarity when their capitalist narrative is agreed with. Liberals claim they want to stand in solidarity with muslims, but clearly it has to be the right kind of muslims I.E. not ones who support Bernie Sanders or criticize Israel.

This whole situation sums up why we must abandon liberalism and why we must embrace socialism and communism, however we must do it from a place that actively rejects Islamophobia and all other forms of hatred. If socialists are to be the the active agents against white supremacy that we claim to be then we must also actively work to reject Islamophobia. This means we must not fall into the liberal trap of being selective with our solidarity. We must stand with muslims whether or not their stories or perspectives agree with our narrative. We should actively be incorporating their perspectives into our narrative and dialectic. A failure to do so would in-turn perpetuate white supremacy. We also must not reduce our Muslim comrades to just being victims in need of our help. The woman in the video is clearly not someone who needs a patronizing helping hand, but rather she is clearly an active agent in resisting the oppression that is Islamophobia as are most of the muslims in places such as Palestine who are actively fighting against their oppression.

The woman in the video had every right to confront Chelsea Clinton and Clinton clearly has no remorse for what she said and did to Ilan Omar and she refuses to see how that affected not just Omar but muslims as a whole. Those leaping to Clinton’s defense are actively defending white supremacy and are either being belittling or selective in their solidarity. Socialists must show support for muslims but that does not just mean attacking Clinton or supporting muslims who fit our narrative. It must mean that we elevate the narratives of Islamophobia’s greatest victims. To over come white supremacy we must be actively incorporating all of the realities of oppression into our analysis. To forsake Islamophobia or perpetuate it is to perpetuate the same white supremacy that prevents black families from getting justice and is splitting child and parent at the border.

Clinton had no business being at that vigil, liberals have no business defending her presence, and socialists must make it our business to be active agents in ending all dimensions of white supremacy, we can forsake nothing if we are to be active agents against oppression. If you disagree with me, well then, “I’m sorry you feel that way.” ¯\_(ツ)_/¯