In the spirit of Halloween, what could be more perfect for today than a reflection about the original American king of Horror.  What would be even better still would be a reflection on both him and another king of horror, the B-cult movie kingpin that is Roger Corman, who was not only a fan of Poe but was the director how adapted Poe’s stories for the world in the 1960s.

There are no directors more fitting to have brought Poe to life than Corman.  As you can tell by the title I am going to make a somewhat intricate comparison, and it is one I stand by with enthusiasm.  Roger Corman is the Edgar Allen Poe of cinema, both were workaholics, both are either loved or hated by their critics, and both broke records with the amount of content they produced.  Corman and Poe, two names that are practically synonymous thanks to film. 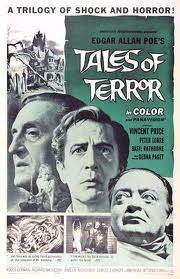 Let’s start by taking a look at Poe.  It is often forgotten that Poe wrote much more than the few gems we make him famous for.  Poe, much like Corman, Poe continually created content.  Among Poe’s several addictions, one of them was work.  In between the classics of his that stick out such as “The Raven,” or “The Fall of the House of Usher,” are an immense body of obscure works that people rarely know or care about.  Poe was the type of writer that had to write something everyday, no matter what.  Here is one similarity with the cult movie king.  One of Corman’s crowning achievements is the fact he has produced a record breaking number of films, by 1990 he had produced over 100 films, several of which he also directed.

Now here is another similarity in that regard, the truth is when you are the type of artist who must always produce content, your few gems will make the majority of your work seem like crap in comparison.  A harsh thing to say but nonetheless true.  When you compare Corman’s perfect adaptations of Poe and his still living classics like Little Shop of Horrors or A Bucket of Blood to practically all his other movies, one can definitely find fault in some in any of those films.  However the fact he was still able to keep creating content, and still make a profit on each film, is another achievement in itself and it is one Corman has over Poe.

When you compare Poe’s gems to his total body of work, you see an immense body of work you can easily find fault in.  This left both Corman and Poe open to ridicule from critics.  Corman was able to take his criticism and make it work for him, he gladly accepted the title of being a b movie Kingpin if it meant he would get to keep producing his work.  Poe being temperamental and moody, was eventually subject to the mercy of his critics.

Yet Poe did have critics who were on his side, as is the same with Corman.  Some people, like me, love the camp and bizarre nature of Corman’s less notable work, and it is fair to say that by accepting his title as a the B movie King Corman was liberated and free to play with his content as much as he wanted, and still make a profit.  While Poe was less free in this regard he still cared less about meeting critics standards and was just focused on creating and distributing the content he created, as was Corman.

Roger Corman, a film producer and director who has created immense amounts of content, some cinematic gems and a wide body of B movie bizarre cult camp.  Edgar Allen Poe, a writer who produced an immense amount of collected works that leave a few pieces of classic literature and several more obscure uninteresting pieces.  Both loved and hated by critics, both workaholics, both legends.

Don’t believe me, watch The Fall of the House of Usher, Tales of Terror, and The Masque of the Red Death for yourself, then tell me I am wrong, and have a Happy Halloween.