Donald Trump is an embezzler, fraud, national security threat, and a rapist.

Multiple women have accused him of harassment and sexual assault, including his own ex-wife and a thirteen year old victim of Jeffery Epstein.

In 2016 multiple contractors hired by Trump have shown than Donald Trump never paid them for their labor.

Let us not forget the crime against humanity that is happening at the US-Mexico border and in the concentration camps.

Pelosi and liberals scoffed at the idea of impeachment for the majority of Trump’s first term despite all of this. Impeachment was argued to be “impractical,” or worse their was this naive faith that the Mueller Report would find something punishable in Trump’s 2016 conduct.

Yet when it comes to light that Donald Trump attempted to smear Joe Biden, the undemocratically self selected candidate being forced down our throats by the capitalist liberal establishment, suddenly liberals are up in arms.

Or at least they want us to think they are.

Peter Daou, the former Clinton surrogate who has become enlightened and gone #toofarleft, tweeted that what we are seeing is a “botched impeachment.” There is little to no evidence being gathered from these proceedings and the odds of any criminal convictions coming from it become slimmer and slimmer with each fruitless testimony. 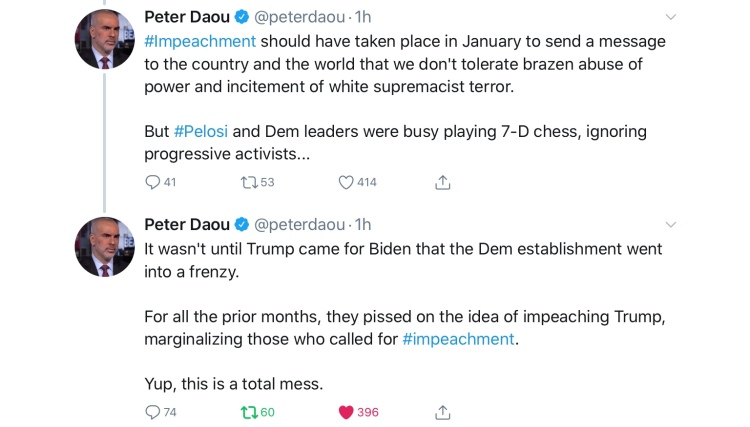 Despite the record of crimes against humanity and sexual assault, Trump will most likely suffer zero consequences from impeachment. What is worse is that Daou is probably correct, Trump will be able to tote his acquittal in the 2020 race as a victory, a victory practically being handed to him by Nancy Pelosi.

Trump would have a much harder time explaining himself for why he tortures migrant children or why an Epstein victim is accusing him of rape. Anyone can explain away digging up dirt on the Bidens though.

I support impeachment, but I am not holding my breath that anything good will come from this one. I want to see impeachment happen so that women and migrant children can have justice, not so the Biden’s are protected.

Impeachment is supposed to at least inconvenience Donald Trump, but the bastard seems to be doing just fine.

Peter Daou is right. This impeachment is botched.